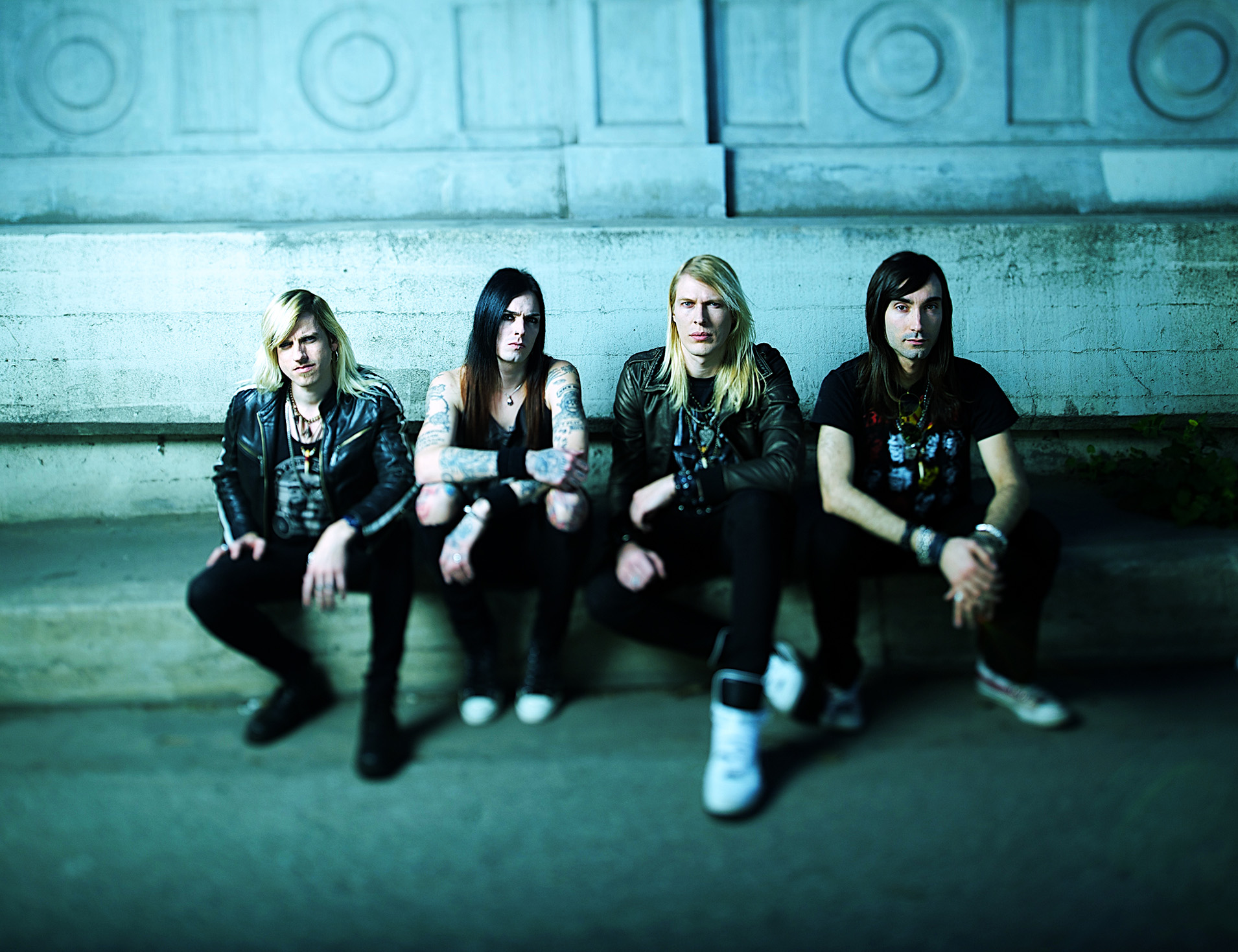 BlackRain is a band of dudes that play together since they were in high school. First they started by covering their idols like Metallica, Iron Maiden, Pantera, etc. But the real beginning of BlackRain is the day they’ve signed their first contract with a crappy label, the 6th June 2006. We don’t tell you lies, the 06/06/06 is the date at the end of the first contract they’ve signed. As in “Phantom of the Paradize” they felt like signing with the devil. Maybe it’s the reason why Swan, their leader, decided to take the name of the character of this movie.

Their first touring experience was in Japan, in August 2006. They knew nothing about the stage, about the way of behaving in front of a crowd. Like in “The Karate Kid”, they’ve been taught how to rock by the local agent that took care of them. Uchida, it was the name of this guy, was totally pissed off by the band he first saw on stage. He taught them how to move, how to do a set list, how to talk to people, how to correctly play the song that he loved on the album.

Every night, they were ending in a bar called The Current, in Shinjuku. There, they discovered a lot of new bands like Hardcore Superstar or the first Crashdïet album. Even if they were a pure heavy metal band, they discovered new bands that were playing a kind of music with catchy chorus, inspired a bit from the 80’s spirit, but with a modern view. They precisely knew at this moment  this was the way they had to take.

Back in France, they worked on a first real album (they never considered the “thing” they released with the crappy label as an album). “License to thrill” was born, in 2008, followed by a lot of Rock’n’Roll gigs in Europe. They even finish in Tunisia, by playing in front of kids for who it was the first time they saw musicians wearing eyeliners. The national TV invited them but at the last moment, the presenter decided not to let them played, fearing a kind of revolution in the country. Well, the revolution occurred few years after but not because of the band. By the way, this was the most crazy time in BlackRain’s life. Everything seemed possible. The youth went wild. The parties was so hard, too hard maybe. They finished this period with no more money and no more job. How to go on ?

At the end of 2009, they met a manager that helped them to reach a new level. This guy was tough with the band, making no compromise on the way they were playing. BlackRain was rehearsing every day. This was hard, the guys were often pissed but they finally had time to work on what they loved : music. The second album, “A Lethal dose of…” was a bit save from a terrible recording in Swan’s room. But they also had the chance to meet Jack Douglas, the guy that discovered Aerosmith, the multi-million disc seller with John Lennon, Slash, Cheap Trick, Michael Monroe… This was the first time the band recorded an album in a real studio. so Jack proposed the name of “It Begins” to name this third album.

It was the time when the band was called by “France’s got talent”, the famous TV show. They’ve reached the final and finished fourth. This led to a contract with Sony for their new album. Despite many criticizes, the band was proud to be the only one in the world and to have played their own songs in that kind of TV show instead of playing covers. 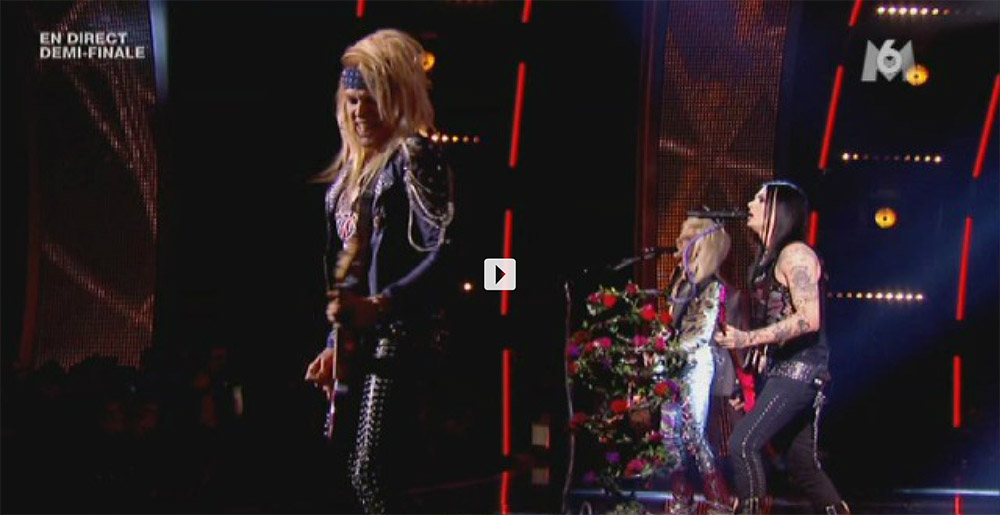 After “It Begins” tour, the band felt a bit stuck in their country. They wanted to come back to international gigs as they did when they begun but with a stronger experience. To be able to reach this point BlackRain decided to record a new album that show how “released” they wanted to be. Recorded between the suburb of Paris and Los Angeles, California during the early part of 2015, this new Long Play is the result of many months of collaboration between BlackRain and Jack who, prior to recording, spent a lot of his time listening and analyzing tons of demos in order to select the best songs and create for each of them the best arrangement … He really applied his magic touch to the whole process. And to complete the circle it’s Warren Huart, Aerosmith’s sound engineer who, along with Jack, mixed these new BlackRain songs at the Spitfire Studio in Laurel Canyon. Hopefully, the band found UDR, an independent and international label to promote them abroad.

They were ready to hit the stage harder than ever everywhere in this fucking world that need Rock’n’Roll more than ever. 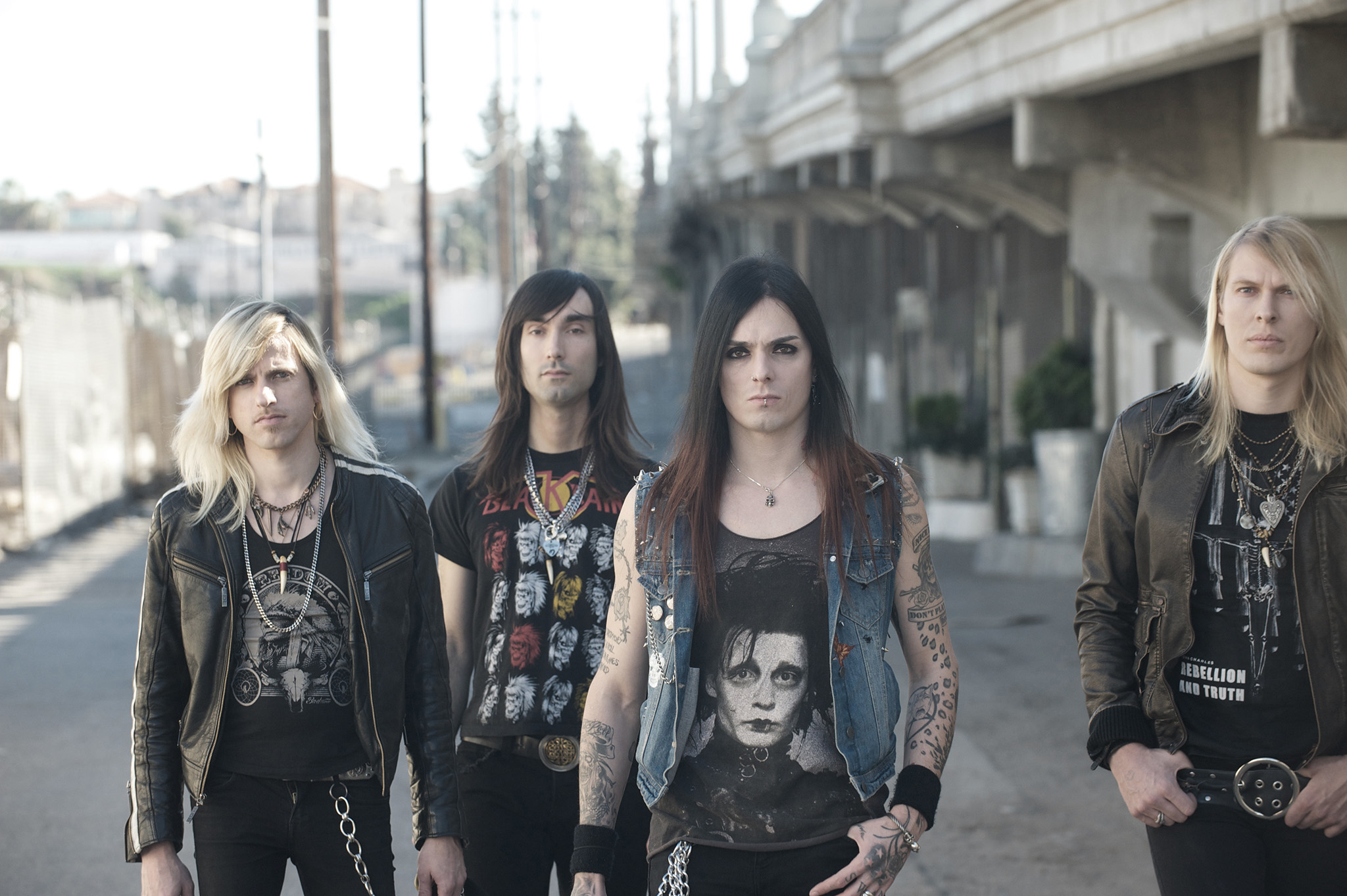 There’s a good reason why, for many years, French rockers BlackRain ended most of their concerts by covering the AC/DC anthem “It’s a Long Way To The Top (if You Wanna Rock’n’Roll)”…

For, having countless concerts in France, Europe and even Japan, these four musicians know for a fact this forthcoming year is undoubtedly the most important part of their career to date. Free from previous past commitments, now they feel like ready to escape to some new territories and have almost logically entitled their 4th album “Released”. 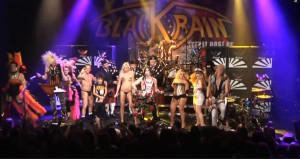 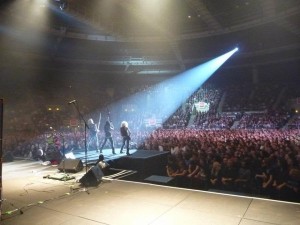 To be able to reach this point BlackRain, then featuring three original members Swan, Math and Max 2, worked unbelievably hard, taking any and every opportunity they could find, deciding to relocate to Paris where they were able to dedicate themselves full time to music. During nearly 10 long years spent learning the tortuous ways of Rock ‘n’ Roll, the band met a lot of good people – Frank, their so precious drummer; great bands like Europe, Papa Roach, Alice Cooper, Scorpions, Steel Panther, Kissin’ Dynamite and Crash Diet with whom they played; the team of a “New Talent” national TV show where they delivered memorable live performances to an audience of several million; Famous photographer Dean Karr responsible of the new band pictures; and last but not least American producer Jack Douglas, known for his work with Aerosmith, Cheap Trick, Alice Cooper, The New York Dolls and even John Lennon… a true music “legend” who provided all of his good old fashioned experience to the making of their 2013’s effort “It Begins” as well as on this brand new album : “Released”. 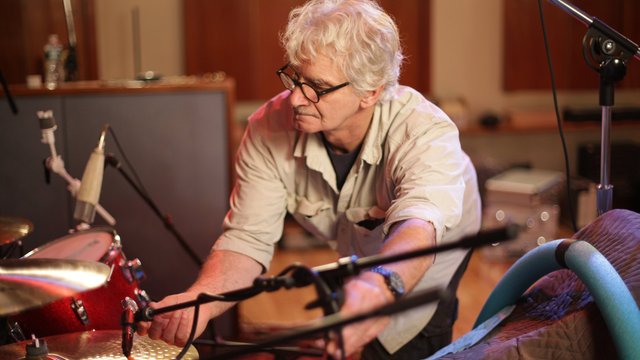 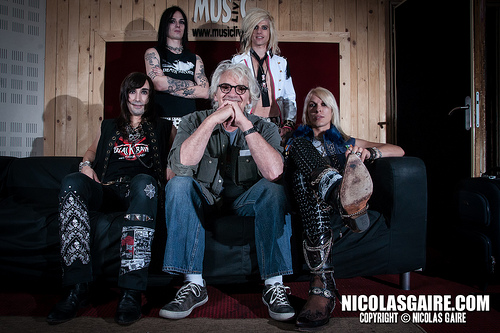 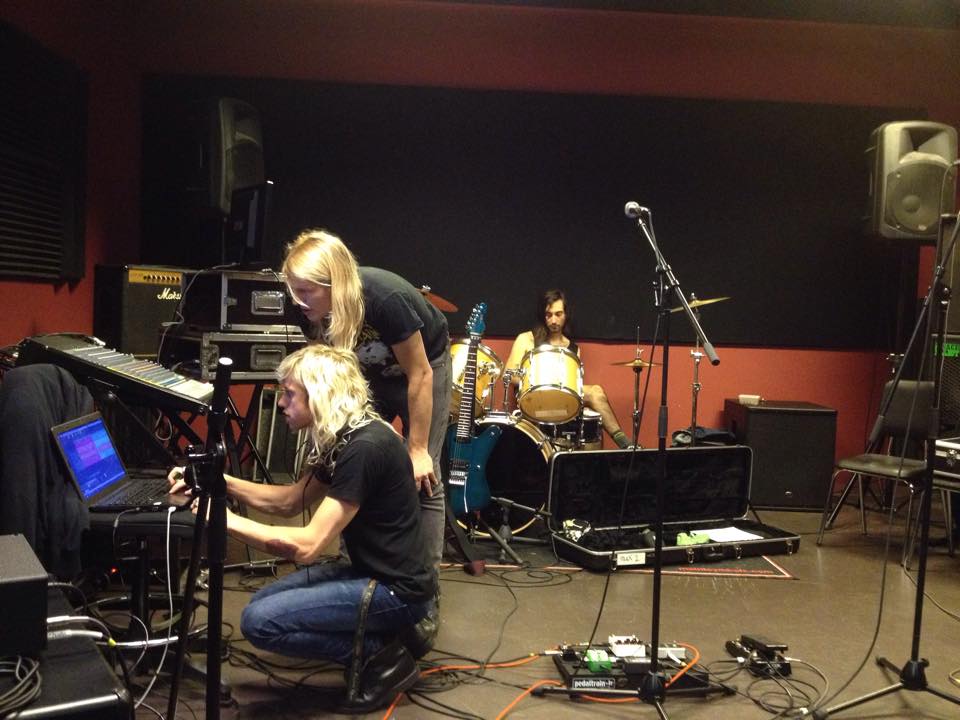 Recorded between the suburb of Paris and Los Angeles, California during the early part of 2015, this new Long Play is the result of many months of collaboration between BlackRain and Jack who, prior to recording, spent a lot of his time listening and analyzing tons of demos in order to select the best songs and create for each of them the best arrangement … He really applied his magic touch to the whole process. And to complete the circle it’s Warren Huart, Aerosmith’s sound engineer who, along with Jack, mixed these new BlackRain songs at the Spitfire Studio in Laurel Canyon. 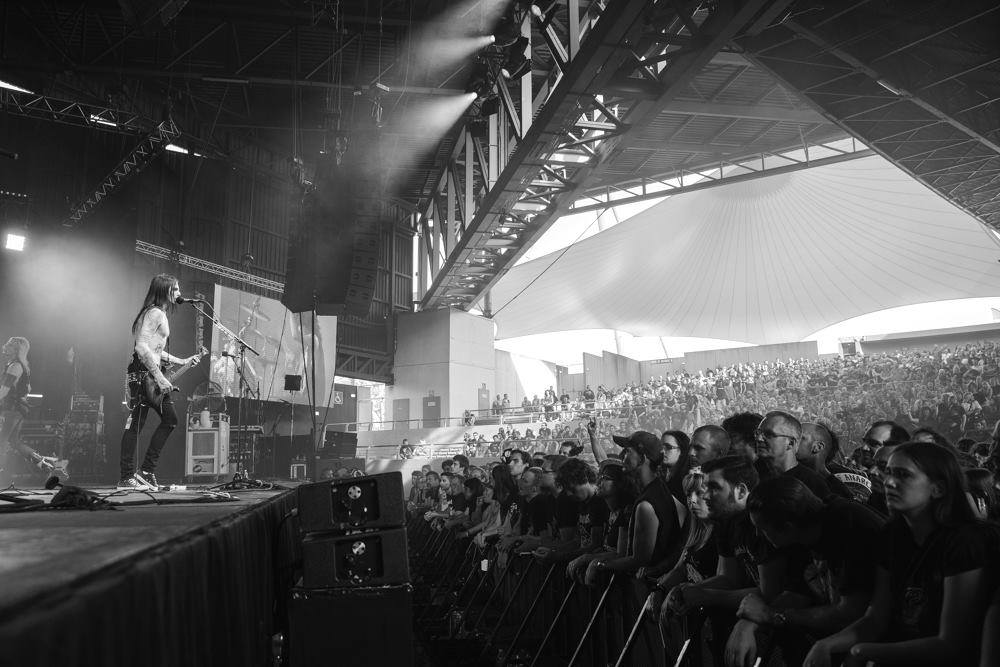 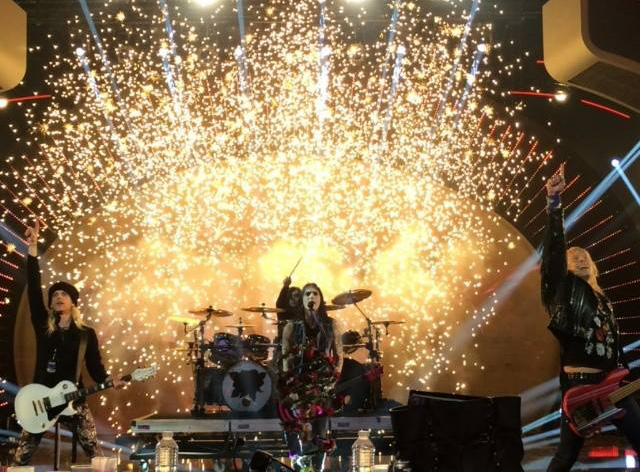 With straight ahead, catchy rockers like “Back in Town” (the first single and lyric video), “Eat You Alive”, “Puppet on a String”, the sharp edged “Mind Control” or the more poppy “Electric Blue” BlackRain reminds us that this gang has grown up with the sounds of WASP, Guns N ‘ Roses, Skid Row, Ratt and Mötley Crüe. Other tracks suggest different influences, equally interesting: “Run Tiger Run”, a mesmerizing groover, “Killing Me”, “Fate to Black” some powerful mid-tempos, “Words Ain’t Enough” and its acoustic flavors or, in a more punky style, “Rock My Funeral” with its anthemic chorus and hook. It’s clear that with these songs, all written by the main composer Swan, you have the kind of artist who’s not just satisfied with living with the influences of the present or the past. The band doesn’t forget to take also everybody by surprise by covering on his own “For Your Love” a classic originally written by The Yardbirds. Through his different approach and choirs, “One Last Prayer”, the last track, proves beyond doubt that BlackRain can never be labeled as “followers”. 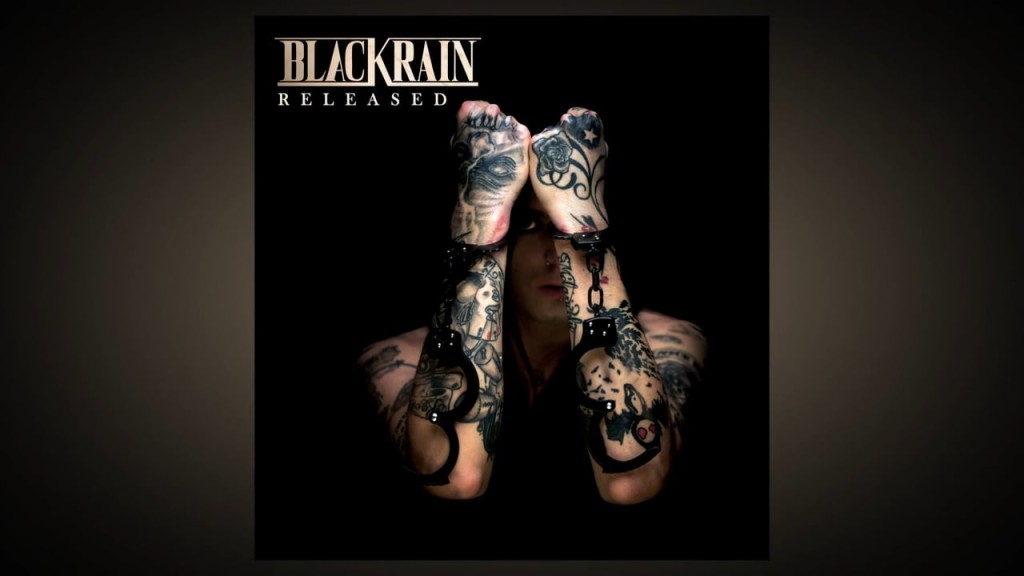